One of the biggest challenges to doing brain receptor occupancy is the blood brain barrier (BBB). Before the receptor ligand (PET radiotracer) can find the target receptor it has to cross the BBB and nature has made this no easy task. Only a few small molecules can move from the blood plasma compartment into the vascular endothelial cells and out again passing the glial feet surrounding the brain capillaries before reaching the receptor compartment.

The activities of neurons are so exquisitely interactive and complex that evolution has tried to eliminate interference from the vast array of small and large molecules circulating in the plasma. In effect the brain tries to function as a single compartment, the gap between neurons.

Our challenge is we can only access that receptor inner sanctum via the blood and the BBB is there to thwart us in multiple ways.

One mechanism to enter the brain is through passive movement across endothelial cell membranes based on lipophilicity. Indeed, this was the basis of the earliest observations on the existence of the BBB over a hundred years ago. It is the lipid solubility that enables caffeine to deliver its wakeup call in your morning coffee. There are few drugs that move faster than caffeine into the brain. So, one strategy we can deploy is to design PET radiotracers that are lipophilic. Problem solved, right? Well, not quite (more on that later).

Lipophilicity is not the only means of getting past the BBB gate keepers. There are both positive (influx) transporters and negative (efflux transporters). There are positive transporters that deliver glucose and essential amino acids and these have been the basis for two common PET radiotracers. The radiotracer FDG takes advantage of the GLUT-1 transporter to efficiently enter the brain and in direct proportion to brain activity. Once in the neuron or glial cell the FDG radiotracer is irreversibly trapped. A second example of a transporter mediated PET radiotracer is FDOPA which is transported by the L-system transporter that transports L-DOPA and phenylalanine into the brain. FDOPA is a widely used clinical marker of Parkinson’s Disease.

We have a done mu-opioid receptor studies with several receptor ligands including [C11]-carfentanil and [C11]-oxycodone that are ligands for Pgp but sufficient concentrations get through the BBB that a PET mu-opioid RO assay can be done and various mu- target drugs can be easily compared. On the other hand, developing a 5-HT1b serotonin or A2a PET RO assay is very challenging in rodents. When concentrations of a radiotracer are very low in the receptor compartment the kinetic model breakdown in part because the variability inherent in the assay do not change and now loom large. Think of it as the “signal/noise” ratio. Measuring differences in RO consequently become unreliable. There are strategies to deal with the efflux transporter but they require careful consideration. It becomes important then to assess the effects of efflux transporters on the test system or develop radiotracers that are not efflux transporter ligands. Among the PET tracer ligand receptor systems known to be affected by Pgp are radiotracer ligands for adenosine A2a and A1 receptors, central benzodiazepine receptor, acetylcholine esterase, beta-adrenergic receptor, serotonin receptors 5-HT1a and 5-HT1b, and mu-opioid receptor.

The take home lesson is that designing a robust PET assay for RO needs to take into consideration the biology/pharmacology of the BBB. When done properly that critical drug kinetic data can be attained, and drug candidates compared. In subsequent blogs we will explore PET PK/RO study design and radiotracer requirements. 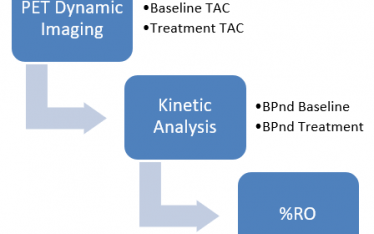 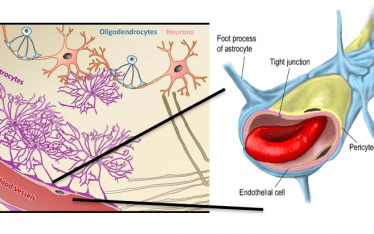